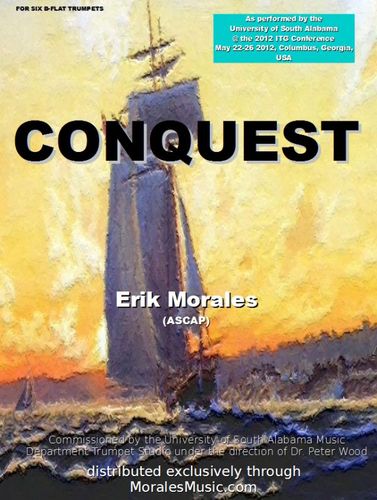 REMIX! Backing Track MP3 is now included as a download with purchase!:

“CONQUEST” is filled with heroic and bold statements. The piece is meant to give a snapshot of what Mobile, Alabama might have been like in 1814 and 1815. On September 14, 1814 the British Royal Navy attacked Fort Bowyer on the shores of Mobile Bay, Alabama in an attempt to block trade into New Orleans. The British would lose this battle and move on to New Orleans in January of 1815. Again, the battle was lost and the British, recognizing the strategic significance of Fort Bowyer, would enter again into one of the final battles of the Anglo-American War of 1812. After securing a victory at Mobile Bay on February 12, 1815 the British were notified of the war's end a few days later through the signing of the Treaty of Ghent. This treaty was actually drafted and signed on December 24, 1814 but was not ratified until February 17, 1815 by the US congress and President James Madison. This work was commissioned by the University of South Alabama trumpet studio under the direction of Dr. Peter J. Wood for premier performance at the 2012 International Trumpet Guild Conference in Columbus, Georgia, USA.