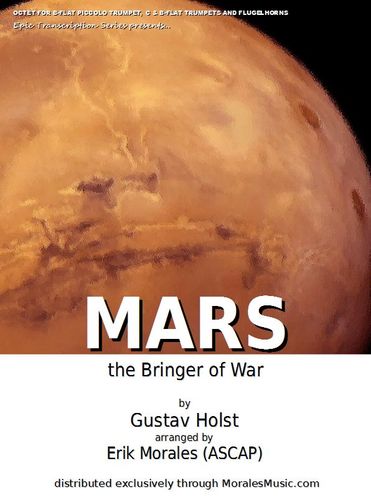 This is an arrangement of the first movement of Gustav Holst's monumental work entitled, “The Planets, opus 32”. The arrangement remains true to the original in both “key” and “form”. The Flugelhorns play the role of the lower voiced instruments from the original score. The well-known euphonium and trumpet solos are retained in their original form (with Flugelhorn 1 playing the role of the euphonium). Mouthpiece tapping, as used in the first several bars of this arrangement, is designed to mimic the “col legno” effect of the strings from the original score. This tapping should be performed with the left hand while the right hand fingers the written pitch as usual. The tapping should also be performed softly as it is only meant to be sensed, not overbearing. Alternate B-flat trumpet parts are provided as a bonus in the event that C trumpets are not available. An optional timpani part is included.