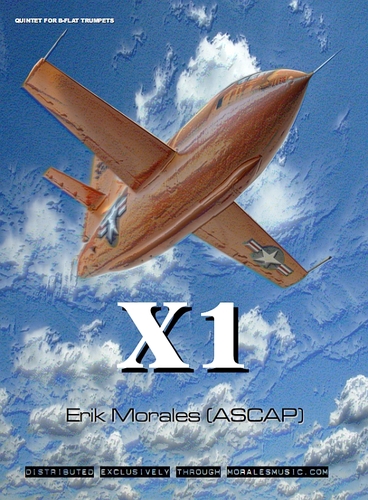 The Bell X-1 (originally designated XS-1) was the first of a series of secret experimental aircraft (or X-planes) designed to break the sound barrier. On October 14th, 1947 Air Force Captain Charles “Chuck” Yeager piloted the X-1 to the first supersonic flight. This historic flight was the first to go 807.2 miles per hour (or Mach 1.06). The X-1, named “Glamorous Glennis” by Captain Yeager in honor of his wife, achieved the supersonic speed on its fiftieth flight. This musical work, entitled “X1”, draws its inspiration from this great historical achievement. Some of the melodic material is based off whole tone scales and diminished fifth intervals. This is to mimic the beauty of the symmetrical design of the X-1. The whole tone scale offers both symmetry and a distinctly mechanical sound to the music. Many examples of whole tone scales and diminished fifths can located throughout the piece.

Students from Mahidol University, Thailand with a brilliant performance of X1: