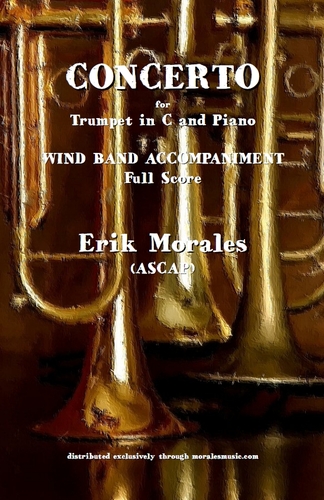 ***THIS IS THE PDF DOWNLOADABLE VERSION ONLY***

This Wind Band version of the Concerto was premiered by The Keystone Winds under the direction of Jack Stamp, with Rich Stoelzel (trpt.) and Rebecca Wilt (piano) as soloists at the 2009 International Trumpet Guild Conference on the evening of May 28, 2009, Harrisburg, Pennsylvania.
This concerto is a three movement work that was conceived as a showcase for both instruments, trumpet in C and piano. At the time I was composing this work I was determined to have the piano play an equal role to the trumpet and not take the accompaniment role which is all too prevalent in the current repertoire. The work is an eclectic mix of rhythmic and stylistic elements which have played a major role in my development as a composer.